Srinagar: A civilian was killed after the armies of India and Pakistan exchanged fire along the Line of Control (LoC) in Rajouri district of Jammu and Kashmir on Wednesday.

“At around 1200 hours today, Pakistan Army initiated unprovoked firing in Naoshera Sector resulting in fatal casualty of one civilian Bodhraj aged about 55 years, resident of Deeing in Naoshera Tehsil,” said an army spokesman.

He said the army immediately evacuated the injured for medical aid, however, he succumbed to his injuries.

The spokesman said the Indian army retaliated to the “Pakistan belligerence in a befitting manner.”

The Army authorities have promised all possible assistance and help to the family of the deceased, he said. 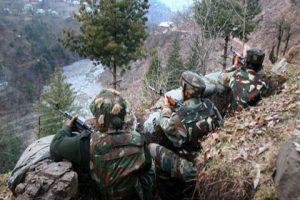