srinagar:A private bus carrying paramilitary personnel met with an accident on Kashmir highway on Monday morning, leaving at least one soldier dead and 34 others injured.

A police official said a private bus (JK 04 5359) carrying Indo-Tibetan border police (ITBP) personnel from Kashmir to Jammu skidded off the road and rolled down into a gorge near Khuni nallah in Ramban district.

He said one ITBP soldier died in the accident while 34 personnel were injured who were rushed to district hospital Ramban for treatment.

The official said the ill-fated bus was being driven by Nazir Ahmad. It was not immediately known if he was among the injured.

SSP Ramban Anita Sharma confirmed the death of one soldier. 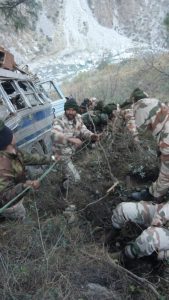